History of the monument

The fortress is situated in stunning natural surroundings, between the lakes of Salses and the Corbières mountains. It offers visitors exceptional views and a truly unique atmosphere. 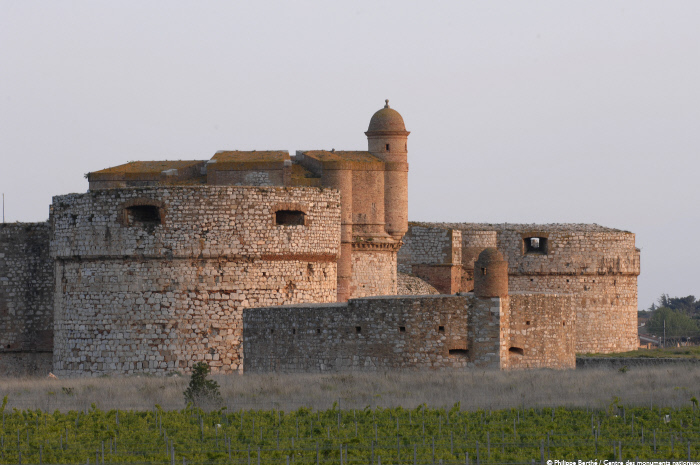 The fortress was built between 1497 and 1504, at the order of Ferdinand II of Aragon (known as “the Catholic”). It was designed by engineer Francisco Ramiro Lopez, the king’s commander and artillery master, to block access to France from Roussillon. It was originally destined to replace a previous château, from which the town takes its name (Salses-le-Château). The earliest records of this château, situated on a neighbouring rocky outcrop, date back to 1007, and it was destroyed during a siege in 1496.

The Fortress of Salses is a masterpiece of military architecture, designed to protect against the recently developed metal cannonball. It is a prime example of the transition between the mediaeval château, with its keep and cylindrical towers with long curtain walls, and the modern fortress, with its rigorously geometric and part-buried structure. Its walls are around 10 metres thick, and the fortress is divided over seven levels served by a maze of corridors and multiple interior defensive chicanes. By virtue of the defensive plan, the fortress is divided into three entirely independent sections, from east to west:

- the communal section, arranged around a quadrangle courtyard, bordered on three sides by an arched portico leading to the chapel, barracks and stables

- the recess, separated from the central courtyard by an interior moat and a redan wall, housing the vast support premises: powder and wine stores, water facilities, kitchens, ovens, prison and guard room

- the keep, standing at 20 metres in height, which acted as the command post, the governor's dwelling and the last place of refuge, isolated from the recess by a series of small courtyards to provide additional light and defensive capabilities.

The entire system was strengthened by a vast dry moat and buffer zone and, to the east, south and north-west, by three separate, pointed towers that acted as additional, advance defensive posts.

The fortress’ location was selected because of the abundant local springs that would be useful during times of siege. It occupies a strategically important position on the main route between France and Spain, on a narrow strip of land between the Corbières mountains and the marshland bordering the lakes.

The fortress, which survived a fire in 1503 despite being unfinished, was the subject of multiple attacks by both the French and Spanish. It was besieged, changed hands in 1503, 1639 and 1640, and was finally conquered by the French in 1642 following a fourth siege. With the signature of the Treaty of the Pyrenees on November 16th, 1659, the fortress’ destiny was finally sealed, and it became the permanent property of France.

Given its distance from the border, the fortress subsequently lost its strategic importance and was threatened with demolition on several occasions because it was becoming too expensive to maintain. The fortress nevertheless survived and was repaired and transformed from 1691 onwards, under the supervision of Vauban.

By pursuing your navigation(browsing) on this site, you accept the use of cookies.